In the science fiction genre, spacefaring is a common trait. We see every kind of spaceships going thru and forth a wide variety of worlds, usually using two kinds of propulsion systems: one for travelling between systems (FTL or dimensional) and another for travelling inside the destination system (sub C velocities).

But what happens when a spaceship approach a Solar system?

Even assuming that our vehicle is able to perform some form of FTL travel, warping somehow the time/space continuum, there will be a final approach done under the speed of light. For this post, I will not consider the presence of dark matter. The reason for that is about knowledge, meaning that we don’t even understand what this matter is, not to mention its possible effects on normal matter.

Let’s consider a spaceship that travels FTL via Alcubierre Drive. Our vehicle will travel inside a bubble of distorted time/space until it reaches the destination system. The first question is: where the spaceship should shut down its FTL engine? The distortion of the normal continuum could affect the structure of the target system and/or influence its equilibrium.

What will be the safe distance from the local star? Well, it could be a lot from the star itself. In our Solar system, we have an object (comet West) with aphelia around 70,000 AU from the Sun (*). The gravitational field of our Sun extends up to two light years (that means, it dominates over the near stars). And the lower estimation of the fringe of the Oort cloud is about 50,000 AU. Our starship will have to do a lot of normal space voyage to reach us.

This opens the way for a little digression. Reaching another star system requires a lot of knowledge about its structure. Assuming that every star system has an Oort cloud, its range may vary a lot according to the star type and dimension. 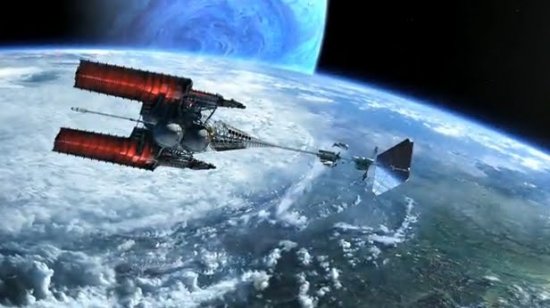 Maybe we can go on a little further in the direction of our star. Well, “little” is not the right word. The Kuiper Belt of our system is about 50 AU from the Sun and the outer rim of this zone will have a low number of celestial bodies in it. It will be a far shorter voyage in the normal space.  A pity that we’re theorising a lot about a ninth planet that will be far over the 50 AU range, something big enough to have an effect on the objects in the Kuiper Belt.

For the sake of this speculation, let’s say that our starship comes back in normal space at a 50 AU range from the Sun. Their navigation system should now track down the current Earth position and calculate a pattern to reach our planet from the outer rim of the Kuiper Belt. It will be an interesting task, even assuming that there will be no need to use the gravitation field of the biggest planets (Saturn and Jupiter) to get a complementary push. How long will it take to our starship to cover about 75 AU (no direct route!)?

The same need, travel out of the Kuiper Belt before starting the FTL engine, will cause to any interstellar voyage to be comprised between two long normal space trips. Our spaceship then should be able to endure a long period in space to function as a planet-to-planet transporter. The alternative will be to have a deep space station, somewhere on the outer limit of the Kuiper Belt, where passengers and goods from the interstellar spaceship could be transferred to another ship, usable only for inner system travels.